A dream for many over the past 5 years is now a reality as the construction process for Lakeland’s high school got underway this morning (August 26, 2020). Contractors for Chris Woods Construction started moving dirt early this morning officially kicking off the two-year construction process. Chris Woods handled the construction of the middle school as well. The excavation and grading starts behind the existing middle school building in what was previously used as a recreational space for students recess and will extend out to the other parts of the campus from there. 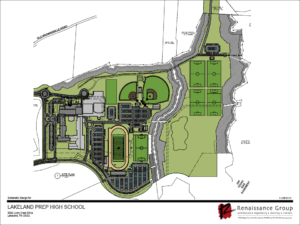 Kevin Floyd, Chairman of Lakeland School Board, was excited to see the 43 million dollar project underway. Mr. Floyd has been an instrumental figure since helping form Lakeland School System in 2013 and the years-long battle to complete Lakeland schools. In a statement, Mr. Floyd said, “Our community has been pushing to provide a full K-12 education to our residents since the inception of our school system. It’s exciting to being the process of making the dream a reality.”

Dr. Ted Horrell, Lakeland Superintendent of schools, was also excited to see the equipment on site. He said, “While we’re several weeks behind when we hoped to begin, I’ve been assured that the overall project is very much on schedule, and we’re thrilled to see construction activity on the campus. The high school has been a dream of the Lakeland community and Lakeland School System for so long, and to see it physically happening is really exciting.” 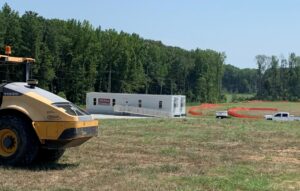 While the site of heavy equipment and a construction trailer on campus is a welcome site he wanted to remind citizens it will be an active construction zone on a fully-functioning campus. This will add challenges to an already unique school year and he asked for patience saying, “We’re going to do our best to make sure the construction doesn’t affect our parents and students too dramatically, but we fully expect there to be some impacts along the way. We know any inconveniences will be worth it in the end.” Dr. Horrell also noted that due to COVID-19, there was no formal groundbreaking ceremony for the project. He anticipates celebrating with the community at a more appropriate time in the future. He finished by saying, “We’re thankful for the continued support of the Lakeland community, the City of Lakeland and Board of Commissioners, and the Lakeland School System Board of Education who all contributed to getting us to this point.” 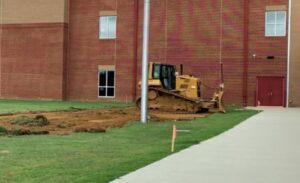 Lakeland Prep High School, as well as the high school athletic facilities, will officially open in August of 2022. It will begin with the freshman class (current 7th graders) and additional grades will be phased in over the following years. The first graduating class for LPS will be in 2026.