This Article originally appeared in The Daily Memphian.

A growing, Bartlett-based trucking firm will build its new headquarters on the old Mall of Memphis site.

RDX has applied for a building permit for what company executives estimate to be an $8 million development on 41 acres at 4590 American Way. 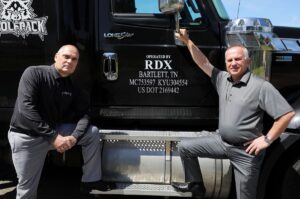 The firm with 90 owner-operator trucks and a shipping brokerage unit plans to build an 11,516-square-foot office for its 23 employees as well as a smaller building with accommodations for its drivers.

The project also will complete the redevelopment for the 113-acre Mall of Memphis site, 39 years after the mall opened and 17 years after the failed shopping behemoth was demolished.

TAG Truck Center purchased the entire 113 acres about five years ago and built its $30 million facility in the middle of the old mall site. Last fall, the TAG owners sold or committed the rest of the property that can be developed to RDX. The Bartlett trucking firm bought 41 acres with an option to buy the other 9 acres.

The new headquarters building will rise at the southeast corner of the old mall site, fronting American Way.

The new facility will provide much needed space for the employees as well as accommodations for RDX truckers, president Roumen Denkov said.

He and vice president and co-founder Dian “Dee” Tchoparov started looking for a place to build a new headquarters about three years ago.

They settled on the old Mall of Memphis property for two reasons: It borders and has easy access to Interstate 240, and it is much closer to the city’s vast industrial district in Southeast Memphis.

The Ross Witt architecture firm is designing the new headquarters and Chris Woods Construction will build it.

If all goes to plan, construction could start in June, Denkov said. But how the COVID-19 pandemic plays out could dictate the timing, possibly delaying the project until next year, he said.

Denkov and Tchoparov are natives of the southeast European country of Bulgaria. They immigrated to the U.S., Tchoparov in 1995 and Denkov in 1997. But they didn’t meet each other and become friends until a Bulgarian national holiday celebration here in 2003.

At the time, Denkov was a manger with Aramark and Tchoparov owned a cleaning company. Tchoparov proposed going into the trucking business together after visiting a trucker friend in Chicago.

“We didn’t know anything about trucking, so the first, logical thing to do was to learn the business,” Denkov said. “So the best way to do it: We each bought a truck and started driving as owner-operators around the country.”

They drove four years before founding RDX in 2010.

Lesson from the road

The most important things they learned from the experien

“Our business model is a little different than the average trucking company. We focus on our drivers.”

He described the company as being “highly selective” in choosing its drivers because Denkov and Tchoparov know how important drivers are to the firm’s success.

But once they hire a trucker, they have the trucker’s back, said Barney Graham, RDX’s director of safety.

He had worked for three other trucking firms before joining RDX in August 2017.

“What’s the difference? You get the small-company feel, you got ownership that truly cares … about the people who work for them,” Graham said.

For example, Graham said, “more than once we’ve had a driver that was in a bad way financially and needed parts or help with repairs or help with a break-down. The ownership here has taken money of their own, paid for the repairs,” he said, adding that drivers would gradually repay the debt interest-free.

Said Denkov, “Let’s say you are somewhere in the country and something happens to your truck. It costs anywhere from $50 to $10,000. We’ll pay immediately to help the guy and then make arrangements to get our money back, but we never charge them a penny.”

Blake Atkins, general manager who is in charge of the brokerage, has worked for seven trucking firms in his 21-year career. For him, the “sense of loyalty” from Denkov and Tchoparov is what sets RDX apart.

Denkov and Tchoparov recruited Atkins in 2012 to establish the brokerage unit, which arranges shipping in the spot market in contrast to carriers that have standing contracts with a customer.

Atkins recalled the challenging first years when his brokerage operation spent more money than it made.

“They have your back,” Atkins said. “Starting a brokerage from scratch, and having faith in somebody to build it into where it’s at now. … It was a struggle. The money spent kept going up and the money coming in wasn’t near enough to cover it.”

The owners’ faith in Atkins and other employees paid off. RDX had five employees total when Atkins started the brokerage eight years ago, and there are 23 now.

“When you need something done these guys are there for you at the drop of a hat,” Atkins said.

“We started in a small room in my house in Bartlett,” Denkov said, and after four months RDX leased a little space in an office building at 7731 Summer in Bartlett. The building is next to Stewart Brothers Hardware, whose owners also own the office building.

Over the years, RDX — an acronym for “reliable,” “dependable” and “xceptional” — slowly grew, leasing more and more space in the building.

No longer an experiment

Denkov and Tchoparov considered the first years of their business as an experiment.

“You don’t really know,” Denkov said. “It’s a huge risk and you just go with it and do the best you can to make it work.”

In about five years an epiphany struck Denkov: RDX was no longer an experiment, the business was succeeding and that perhaps, a new location for a larger headquarters was needed.

“We had so many employees by then and I suddenly realized they were buying houses. You are not going to make probably the biggest financial decision of your life if you don’t have a sense of security about your job,” Denkov said.

“Two or three people by that time bought bigger and better houses and I suddenly realized that something was changing, something was happening,” he recalled. “This company was no longer experimenting. It’s a serious business.

“If our employees feel so confident they can buy a house and feel so secure about their job and their future, it means we did something, right?” Denkov said.

Of all RDX has achieved in 10 years, creating jobs tops the list for Denkov.

“It’s one of the things that makes me very proud of myself, even if that may sound a little selfish,” he said.

“We created jobs and we’ll continue to create more. That’s important, in my opinion,” Denkov said.

Of all the advantages the new headquarters will provide, the location and benefit to drivers top the list, Tchoparov said.

“Here,” he said of RDX’s Bartlett address, “we are located far out in the east part of the city (but) everything happens in the industrial part of town,” he said. “If a driver needs anything, they will be so much closer to us and they can be in and out within a few minutes and keep on going.

“We are not going to burn the drivers’ hours, which is a big factor for how they make their money,” Tchoparov said.

Two people with RDX who do not benefit personally from moving the headquarters to Southeast Memphis are Denkov and Tchoparov. Both live in Lakeland, in the northeast section of the county.