This article originally appeared in the Daily Memphian. 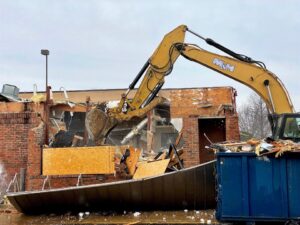 Demolition has started on a former Chick-fil-A building near Wolfchase Galleria.

The structure at 2849 N. Germantown Parkway is being razed to make room for a new retail building that will house an Aspen Dental office and Sleep Number store, said Danny Buring of TSCG, a firm that brokers retail real estate.

Chick-fil-A moved only two doors down to the southwest corner of North Germantown Parkway and Stage. The chicken-sandwich chain built a larger restaurant on a larger, 2-acre site where a closed Walgreens was demolished.

The restaurant opened its new location in June.

Buring, the managing partner of TSCG, represented Sleep Number in its lease with landlord Brixmor.

Chris Woods Construction is the general contractor for the demolition and new construction of this project.