Celebrating its 60th anniversary this year, the Memphis City Employees Credit Union (MCECU) is expanding its footprint in Bartlett with the construction of a new branch from the ground up at 5747 Stage Road. With roughly 40,000 members served through eight branches scattered around the Mid-south area, the non-profit handles about $330 million annually through a wide variety of banking and loan options.

Earlier this year the MCECU bought a parcel from Special Event Service & Rental Inc. about 100 yards down the street from its current location inside the Bartlett City Schools (BCS) administrative headquarters at 5705 Stage Road. 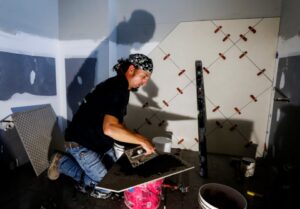 “We needed to stay close to the Raleigh area because we were in Raleigh previously and moved to the edge of Bartlett seven or eight years ago,” said Swan. “Many of our members are in the Raleigh and Bartlett areas, and one of our selected employee groups just happens to be the Bartlett municipality.”

BCS purchased the building and moved into it last year, and the MCECU’s lease is set to expire in two years.

“By the school system going into the building we’re currently in, it really does enhance the area of that end of Bartlett,” said MCECU President Ken Swan [cq]. “And I think by us building a new branch right there it only helps to stabilize that area.”

The City of Bartlett began partnering with the MCECU for its employees’ financial needs more than five years ago.

“We are happy that they decided to remain in Bartlett and build their new building in Bartlett Station, an area of the city that we’re working to help redevelop,” said Bartlett Chief Administrative Officer Mark Brown [cq]. “They’re good partners with the city and help sponsor events for us and our employees”

In addition to the City of Memphis employees, both current and retirees, the MCECU just merged in the IRS employees, Smith & Nephew employees and MLGW employees. Other member groups include Scripps Media Company, the WMC family of TV and radio stations, Ronald Barker Construction Company, Collierville Auto Center, Friends of the Library, and more.

“So our credit union serves a pretty wide group of selected employers,” said Swan, who points out that some of the credit union’s members are also family members of city employees and those from selected employers. “The perks for a credit union are that our fee structure and rates are so much better than from those at a bank. Credit unions are one of the best hidden secrets out there.”

Being a non-profit, the MCECU’s goal is to give the money back to its members, since they are the actual owners of the credit union.

Construction of the new MCECU branch is being handled by Chris Woods Construction, and the Renaissance Group designed the 3,000-square-foot traditional design, which features an ATM and drive-through window. Cost of the project is estimated near $1 million.

Overall the MCECU has eight branches scattered around the Mid-South, including two that were merged in in May following the I-Trust Federal Credit Union merger.

This year, the credit union has added employees, taking it to 80 full-time and 20 part-time, and Swan expects to add two to three more once the new building is finished.

The MCECU, formerly the City of Memphis Credit Union, formed in 1959 and the first branch was located inside the City Treasurer’s office at the old court house downtown.

“We’ve been around 60 years, and the credit union is very healthy. We’re doing very well,” said Swan. He hopes to transition to the new facility by next February or March.