The Arlington exit of Interstate 40 is seeing more development, including a staple of many expressway exits – the suburb’s first hotel.

Located southwest of the interchange, the foundation and the first couple of floors to the Fairfield Inn & Suites by Marriott are in place – a major structure in the 17-acre Arlington Trials development by Grant Properties.

A new Sentry Self-Storage facility – also under construction – is another piece of the project next to the Fairfield Inn and a second hotel is a future possibility. There are four commercial lots for sale in the development. Arlington Trail Road, which opened last week, paves the way to the commercial parcels. 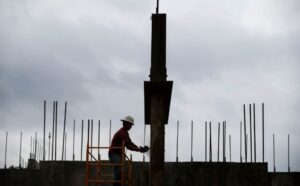 The hotel is the same prototype as one Grant Properties developed near Carriage Crossing in Collierville under its Southern Hospitality LLC banner.

“It will be pretty much the same as the one in Collierville, with a little different exterior and a few little changes because of the site plan, but the building is basically identical,” said developer Milton Grant.

The four-story, 110-room hotel (measuring a total of 56,776 square feet) will feature a meeting room, exercise room and exterior pool. Roughly 25% of the rooms will be suites. 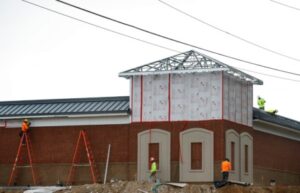 “The self-storage portion (which will contain approximately 550 bays) will be finished toward the end of this year, and then the hotel will be done in the summer of 2021,” said Grant, who plans to see how the first hotel does before starting the second hotel, which could be a SpringHill Suites by Marriott.

Arlington Chamber of Commerce Director Tonia Howell believes having the hotel open in Arlington will benefit the business community. Other potential clients include those visiting the West Tennessee Veterans Home when it is built and tournaments hosted by Arlington High a short distance north of the expressway interchange

The Arlington Trails project was narrowly approved 4-3 in early 2019. Alderman Jeremy Biggs was among those opposing the development.

“Although I did vote against the project, I sincerely hope that it is successful and will ultimately be something that all residents can be proud of,” he said. “The project will ultimately bring in additional revenue to Arlington from the sales and room taxes, which hopefully can offset residents’ future property taxes.”

Part of the reason for Biggs’ opposition was the self-storage aspect. With the interstate exit as a southern entry point into Arlington, he wasn’t sure that type of business was what he wanted as a visitor’s first impression of the suburb.

“As town leaders, I believe we must try to envision what the area will look like 20 to 30 years down the road and make decisions that coincide with the board’s long-term vision for Arlington,” Biggs said.

Biggs also is concerned the remaining commercial lots on the project will be too small for sit-down restaurants and will attract only fast-food chains.