This article originally appeared in the Daily Memphian.

There probably isn’t a life expectancy date on a school gymnasium, but more than 50 years should indicate a recreation space has served its purpose.

With that in mind, it was time for a new gymnasium at Collierville Elementary, not just benefitting the Little Dragons but the town as well. There is plenty of evidence that the old gym is outdated, including not being compliant under the Americans with Disabilities Act, a shortcoming resolved in the new gym.

Collierville Schools board Chairman Wright Cox recalled his daughter playing on that court — built in 1970 — about 25 years ago. 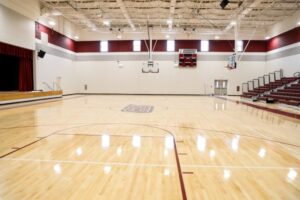 “It was antiquated then. It is way past overdue to be replaced,” he said.

Tools buzzed Wednesday morning as crews added the finishing touches in the 16,000-square-foot space. The smell of the flooring finish filled the air. The wood, unscuffed by little shoes, glistened under the LED lights. For the first time in five decades, the gymnasium brought a new feel to recreation at the school.

“They’ve made (the new gym) as multi-functional as possible for all the activities you need for an elementary school,” Wright said. “It’s a great, really well-done, first-class facility.”

The district used its capital outlay funds to pay for the $4 million project. The Shelby County Board of Commissioners gives each school system funds specifically for building improvements that cannot be used for instruction. The new space is decked out in maroon, white and gray, the elementary school’s colors. CES is written on center court.

Third-grade students were enjoying dodgeball during physical education Wednesday for one of their final classes in the old gym. The recreation area was once connected to the original school building on Peterson Lake Road, but the educational rooms have since been demolished.

The existing gym will be razed this summer and the old varsity football locker rooms will go down with it. Collierville High played football games on the elementary school’s campus until Dragon Stadium opened on East Shelby Drive in 2018. While the old football stadium still stands, demolishing the other structures gives students open outdoor space for recess.

The decision to build a new gym came after the district considered the cost of needed repairs, maintenance and the age of the structure. There were other factors, such as the old gym not connecting to the main building, which caused safety concerns.

A new hallway connects the new gym to the building, and the cafeteria also provides direct access to that hallway. 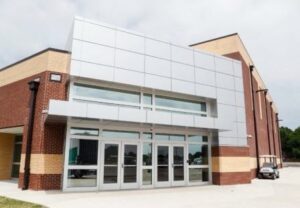 Construction was estimated for completion by March, but crews found underground utilities from the demolished buildings. Legacy Shelby County Schools owned those buildings before formation of the suburban district, and Collierville staff was unaware of the utilities.

Despite the delay, Principal Michael Ruiz hopes students can use the new gym next week. Fifth graders will have the opportunity to enjoy it before advancing to middle school. He plans a special unveiling for students.

“I’m excited for the kids, that they get to have this cool fancy new facility,” he said. “It’s a massive upgrade. I’m excited to see them in it having fun in it. There’s a lot of opportunities.”

In addition to a full court, the gym is striped for volleyball and the school has nets available. It has new restrooms, coaches’ offices and a bookstore with some school supplies and Collierville Elementary memorabilia .

Collierville Elementary will also have a Lü, a high-quality projector with cameras that detect movement. PE teachers can use the tools for interactive games, but also incorporate other subjects — such as math and English language arts — in some of the games as well. Bailey Station Elementary utilizes the technological equipment at its campus, and Sycamore Elementary is installing its Lü equipment this week. 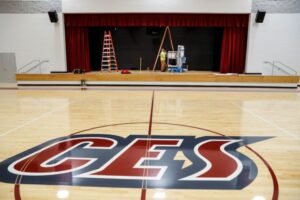 The Collierville Elementary gym will also provide expanded opportunities for arts and theater with inclusion of the school’s first stage. Prior performances were in the old gym, but the students were just on the floor rather than a dedicated space for performances. The lights in the new gym are dimmable, adding versatility to the space.

“Collierville Elementary was always a school that didn’t have a stage. We wanted to bring it up to par with the rest of the schools and adding that will give them more ability to have programs and assemblies they didn’t have before,” Thomas Dougherty, the district’s chief of operations, said.

About 400 people can sit on the new bleachers, but the gym can hold 950 if chairs are set up on the court.

The gym will also benefit the town. Collierville’s recreation basketball league utilizes the district’s other five elementary school gyms each season. The gym can be accessed without walking through the school building, so classrooms and main hallways can remain locked during weekends when recreation leagues use the gym. 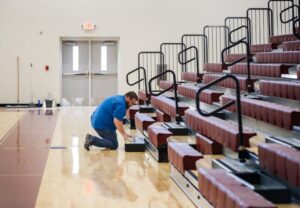 “They’ve never requested use of Collierville Elementary, but I imagine that will change,” Dougherty said laughing. “This will add a facility they can use that’s modern.”

Chris Woods Construction served as the general contractor for this project.

Collierville Schools will host a ribbon cutting for the new gym on Tuesday, May 10, 2022 at 5 p.m. The community is invited to see the new space until 7 p.m. Guests are asked to park in the back lot.