Memphis Record Pressing to double workforce by next year

This article originally appeared in The Daily Memphian.

Memphis Record Pressing in Bartlett expects to be the largest producer of vinyl records in North America by next year, making about 130,000 records per day.

Seavers updated those in attendance on the company’s $30 million expansion as well as insight into its growth over the past decade. He and Mark Yoshida founded the company and this year expect to produce more than 10 million records at its headquarters at 3015 Brother Blvd.

Seavers describes the experience of growing the company as “mind-blowing.” 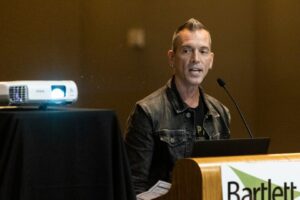 “It’s a humbling experience for me, and for Mark as well, to see where we are today,” Seavers said. “Literally every day when I drive up I say, ‘This is not real. There is no way that we are manufacturing a legacy, analog format/medium in the 21st century, and we’re actually breaking ground and constructing a new facility to do this.’ ”

A $21.3 million facility expansion will increase the company’s manufacturing space by 33,000 square feet, and its number of presses will grow from 16 to 52. The new facility, under construction and expected to open next year, is being built by Chris Woods Construction Co., Inc.

With the expansion, MRP will hire nearly 300 employees by the middle of next year, with an average annual salary of $42,000 including benefits.

Seavers and Yoshida started out working together with a recording studio business in the 1990s. That business morphed into a CD and DVD production business, Audio Graphic Masterworks, during the 2000s. When those industries began to slow down post-Great Recession, they created Memphis Record Pressing in 2013.

“These guys are the definition of entrepreneurs because they have reinvented themselves many times,” BACC President John Threadgill said. “I’ve watched them ever since they came to Bartlett, and it’s just been an amazing story with their ups and downs and trying to find their niche. They’ve created a great organization, a great company.”

MRP partners with Czech company GZ Media, the largest manufacturer of vinyl records in the world with 200,000 records produced per day and 2,000 employees.

“It has been a fascinating experience since partnering with them, how this rocket ship has continued to blast faster than we can keep up with,” Seavers said.

Over the past year, the company made 350,000 copies of Adele’s “30” alone, and that release is an example of a “high-security” title that requires armed guards at all times during production to help guard against leaks.

“You can’t throw away any trash,” Seavers explained. “So by the end of the Adele production, we had two tractor trailers full of waste, but we couldn’t throw it away because of the risk of just one of the center labels getting posted to social media with the track listing.”

Seavers said the company has no further expansion plans at present.