This article originally appeared in the Commercial Appeal.

Construction is expected to begin again later this month on South Germantown Parkway near Agricenter International.

Bob Turner of Southern Properties, the Cordova company developing the land at 200 S. Germantown Parkway near Walnut Grove Road, said no tenants have been chosen yet, but depending on how much space future retailers might need, his planned 12,000-square-foot building will be able to hold between five and eight tenants. 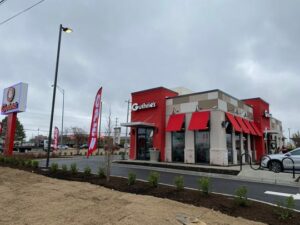 The new building is on one of four parcels Turner’s company is developing in the same area. On an adjacent parcel, a Krystal restaurant is already open. On another Guthrie’s Chicken expects to open in about two weeks, Turner said.

“We’re building this as a spec building so we can get a tenant into it faster,” Turner said Monday morning.

Spec buildings are constructed before tenants are secured in hopes of later selling or leasing the space.

A $1 million permit was filed Friday to start work on the building. It will be constructed as a shell so that the inside can be adjusted based on the needs of the future tenants.