That’s why Anderson, Enterprise Holdings’ regional vice president for West Tennessee, was happy to be front and center for a ribbon-cutting Thursday at the airport’s newly completed consolidated rental car facility.

Enterprise brands Alamo, Enterprise and National move as many as 1,000 cars a day in and out of the airport’s ground transportation center, which consolidates parking and rental car counters, Anderson said. 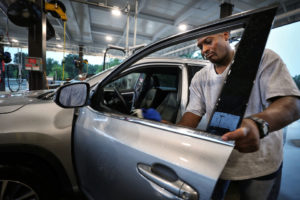 The new maintenance compound, on Airways south of Winchester, is two to three minutes closer to the terminal than the old one on Rental Road, off Democrat north of the FedEx Express Super Hub. That translates into 33 to 50 hours a day in labor cost savings for drivers to move the cars.

Anderson said the new compound has better security and “state-of-the-art equipment like you’d see in a dealership.” Enterprise has 12 acres of the 47-acre facility, compared to 6 acres at the previous site.

“I feel like we moved from a trailer into a mansion,” Anderson said.

Airport officials joined rental car company representatives to take the wraps off the new compound, which has been under construction since fall 2017. The consolidated rental car facility, known as the CONRAC, is not open to the public.

The project’s completion clears the way for rental car companies to vacate the Rental Road compound, freeing up land for future needs of the airport’s anchor tenant, FedEx.

“That property becomes very important for other purposes, that being the people across the street from you at FedEx,” airport president and chief executive Scott Brockman said.

FedEx has steadily taken over land on the north side of Democrat that the airport previously used for other purposes. The company has employee and truck parking and fuel storage facilities in the area, among other uses.

FedEx is in early stages of a multiyear, more than $1 billion transformation of the hub to make it more automated and efficient.

The new maintenance compound’s opening completes a series of chess moves that began in 2012. That was when the airport opened a new economy parking garage and rental car facilities just north of the terminal building. 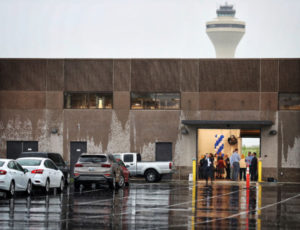 Before rental car facilities came onto the airport grounds proper, Rental Road is where cars were rented or returned. The airport provided shuttle buses to move passengers between Rental Road and the terminal.

When rental car companies moved next to the terminal in 2012, they left behind support operations such as light maintenance and vehicle storage on Rental Road.

The economy parking garage includes a quick turn area where vehicles are cleaned inside and out and inspected before being rented again.

The new maintenance compound now becomes the hub for tire and oil changes and performance of other scheduled maintenance.

Anderson said Enterprise Holdings’ brands have just over 300 spaces available in the parking garage and quick turn area. The rest of the fleet stays at the maintenance compound until it’s needed to replenish supply in the garage.

New cars entering the rental companies’ fleets and used cars being sold to car dealers also will be processed at the compound.

Avis, Payless, Budget, Hertz and Dollar/Thrifty will also be there.

The rental car companies are initially paying $351,000 a year in rent.

The facility’s opening comes as the airport’s rental car revenues continue to trend upward because of growth in passengers traveling to Memphis. 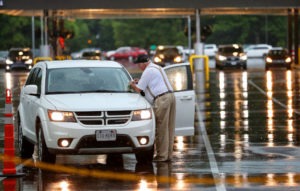 Airport chief financial officer Forrest Artz said the compound was funded by a facility charge that rental car companies collect from customers. A roughly $21 million bond issue was secured by the facility charge revenue, and the balance came from pay-as-you-go revenues from facility charges, Artz said.